Upon application to the decayed surface, a layer of silver protein conjugate and silver minerals forms, increasing resistance to acid dissolution and enzymatic digestion. Hydroxyapatite and fluorapatite form. The treated lesion increases in mineral density and hardness. The silver acts as an antimicrobial, the fluoride acts to remineralize and the proteins that break down the dentin are inhibited. The ammonia acts as a stabilizer, keeping silver and fluoride ionic in solution. SDF will always discolor anything with exposed collagen, meaning it will stain decayed or demineralized sites and soft tissues, but not healthy tooth structure.

How deep does it penetrate?

Arrests the progress of an already formed cavity in permanent or primary teeth.

Before application: take care of your patient: Show them the consent form, inform them about the staining and protect their eyes.

Direction for use for children 0-3 years ol

Maximum of 1 drop per 10 kg of bodyweight per treatment visit 3.

Educate your patients on staining!

Staining is an indicator of antimicrobial effectiveness.
The functional indicator of effectiveness is when the silver oxide is bound to the diseased collagen and intrinsic pigmentation of a carious lesion occurs. These oxides don’t polish away because the blackened lesion retains its dark color for a long period, which is why the antimicrobial effect is long lasting.

SDF stains demineralized areas and soft-tissues. Stains can be reduced by gentle polishing with tincture of weak iodine solution or by being covered with Glass Ionomer.
The staining is not immediate but will be noticed within hours. It will be limited to direct areas of contact. For soft-tissue, it will fade over a period of 24 to 72 hours.

Black mat is an indicator that the lesion is static.

1870-1912: SDF IS USED FOR 80 YEARS AS A CARIES-ARRESTING AGENT IN ASIA
Ohaguro, a custom of dyeing one's teeth black, was practiced in Japan and other countries. It was also beneficial, as it prevented tooth decay.

2015: ADVANTAGE ARRESTTM IS AVAILABLE IN THE U.S.
Advantage Arrest is commercially available in the United States through Elevate Oral Care, LLC. Since then, it has been used extensively by oral health professionals in the U.S., off-label for the arrest of tooth decay.

2016: GRANTED THE FDA BREAKTHROUGH THERAPY DESIGNATION FOR THE ARREST OF TOOTH DECAY
Advantage Arrest is granted the 1st Breakthrough Therapy Designation by the FDA for an oral care product. This designation represents the FDA’S effort to address an unmet, serious, life-threatening medical need where there is no available therapy and to expedite the review of such products. The designation was granted based on the FDA review of 10 worldwide randomized clinical trials evaluating silver diamine fluoride for caries arrest in children aged 3-9 or adults aged 60-89. Collectively these trials involved 1,500 subjects who were monitored for 1-3 years.

2016: THE NEW YORK TIMES PUBLISHES AN ARTICLE ON SDF
Advantage Arrest is the subject of hundreds of lectures, online posts and articles. It is featured on major consumer media outlets including the New York Times, which published a whole story entitled “A Cavity-Fighting Liquid Lets Kids Avoid Dentists’ Drills”.

2017: ADVANTAGE ARRESTTM IS APPROVED BY HEALTH CANADA
Advantage Arrest is granted the Health Canada indication of an anti-caries agent. 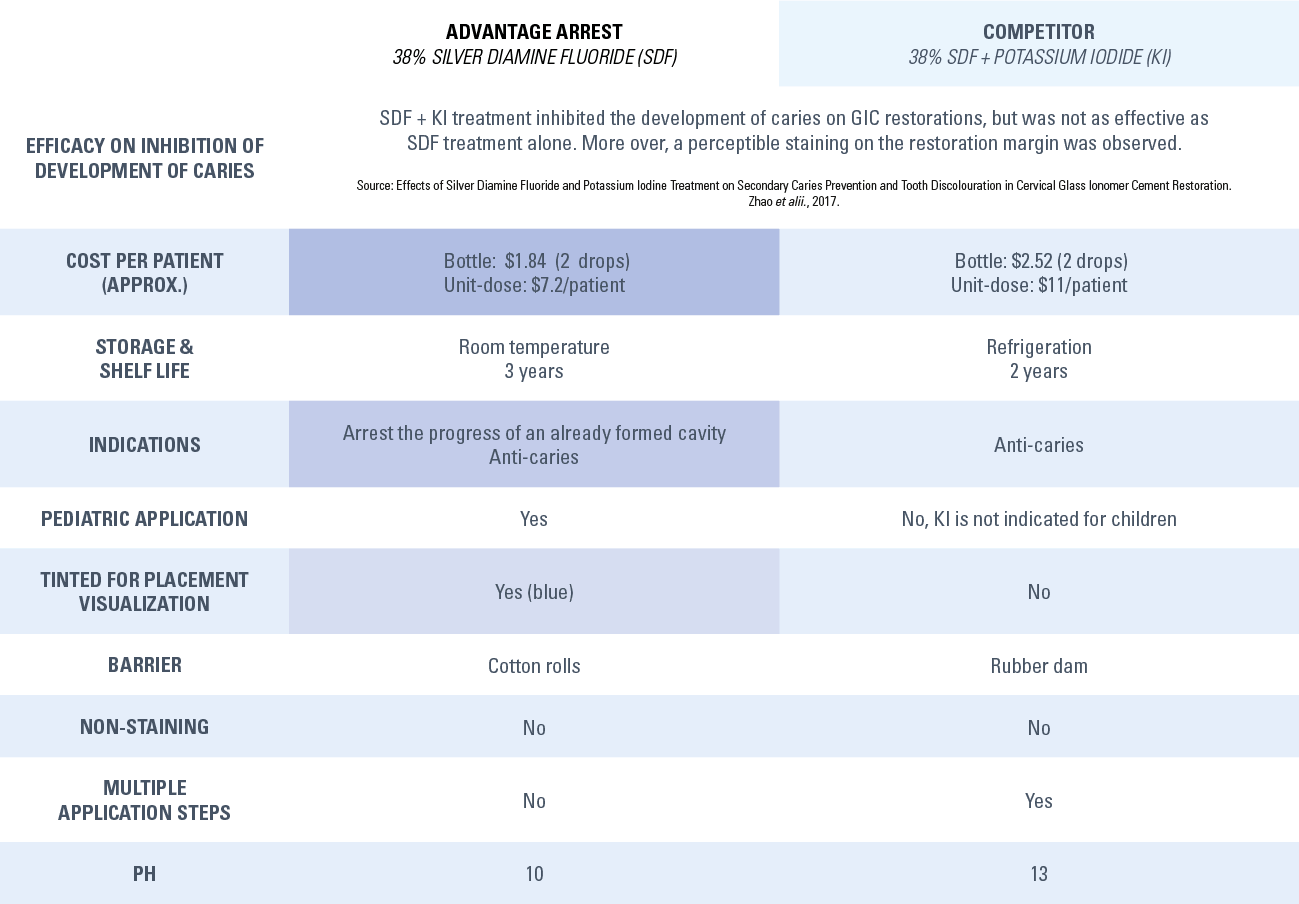 Just got back from the ASM (2017) last week where I ordered my first bottle of Advantage Arrest from Oral Science. By far my favourite company for quality products. This product enables you to arrest those "suspicious lesions". I can't see how this wouldn't be beneficial for every IRDH!

My daughter, age 4, had a successful application of silver diamine fluoride (SDF) in Calgary to arrest decay in her primary molars. Even though I ensured limiting sugar intake, eating healthy homemade meals and following a strict dental hygiene, I was shocked when decay was diagnosed in her one tooth, and six months after that three other teeth were affected too. I was thrilled when I found out that Health Canada approved SDF for caries treatment under the product name Advantage Arrest, which is distributed by Oral Science. Our pediatric dentist has just ordered SDF product and I was happy we were able to try it with amazing early results. The decay was treated and arrested in all four teeth. The SDF application was easy; all four teeth were treated in 5-7 minutes. No tears, no fear, only smiles and a gift to take - the part my daughter enjoys the most. I believe it can truly revolutionize the dental care in young patients.